Filming of an Olympic Proportion in Tower Hamlets

Its been a bumper 6 months of filming in the first half of 2021, and Tower Hamlets has been inundated with requests to film from large scale TV Dramas, to Feature Films and Commercials. We’ve picked out some of our highlights below.

Delayed by a year due to COVID-19, the Olympics and Paralympics have finally arrived in a jam packed summer of sport, with the opening ceremony kicking off on Friday 23rd July 2021. For the coverage on Channel 4 of the Paralympics. The production contacted the Tower Hamlets Film Office, managed by The Film Office looking for a unique looking leisure centre to film their athlete participating in a game of Bocca. Filming commenced at Poplar Baths. Originally used as a public bath house in the 1800s, Poplar Baths re-opened in 2016 as a leisure centre. There is an Olympic-sized swimming pool and learner’s pool, a large sports hall with viewing gallery, and a rooftop football pitch available for filming and photography shoots.

The Last Letter From Your Lover

Based on Jojo Moyes’ novel of the same name The Last Letter From Your Lover  follows a young journalist, Elli Haworth played by Felicity Jones, in contemporary London who uncovers a series of love letters telling the story of an intensely romantic but star-crossed affair in the 1960s. The production contacted the Tower Hamlets Film Office looking to film a variety of period scenes around Columbia Road and Ezra Street to film across several days in late 2019. 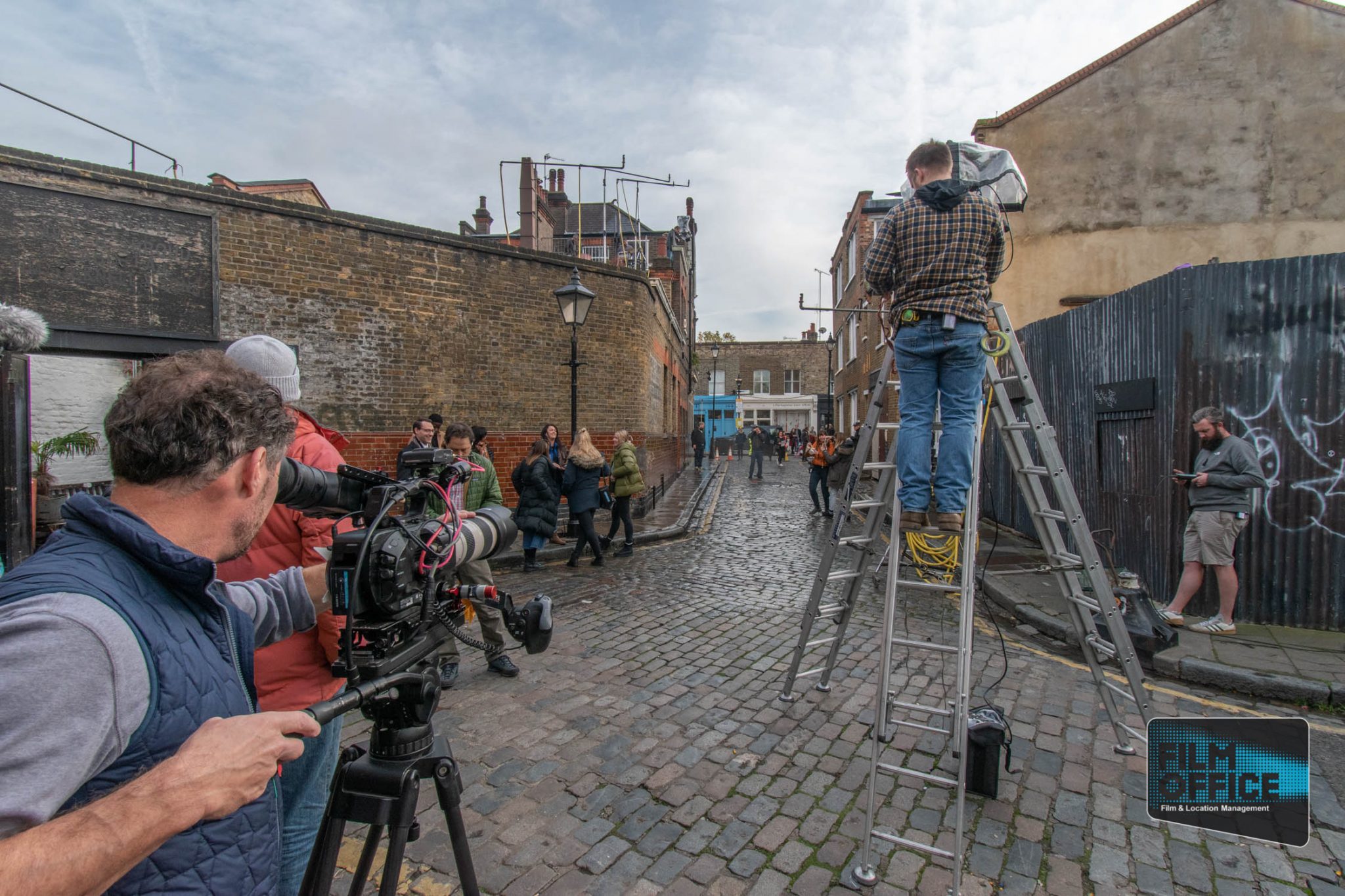 Olwyn Hinds, the Film Officer working on the job commented “With a variety of filming taking place in both interior and exterior locations, the shoot involved a range if moving parts and needed to be managed carefully and considerately in order to achieve both a successful shoot for the production, whilst also minimising the impact on the local area. Consultation plays a key role to ensure that local residents and businesses are aware of Filming proposals. Communication is vital and enables any concerns to be raised prior to Filming taking place so that film-makers can establish practical working solutions to ensure Filming runs smoothly for all parties involved causing the minimal of disturbance at all times. Thankfully everything turned out well on the day, and I can’t wait to see how it all looks when the film is released next month!”

Areas that accommodate filming benefit from significant ‘local spend’ by productions – through use of cafes, restaurants, hire of properties, accommodation providers, parking and green room hire. We ensure film crews use local services / charities wherever possible to reduce the impact of filming on location. For areas of high-level filming we obtain donations, including for local TRAs and Community Groups in order to fund and support their important community work, improving the daily lives of residents in direct, tangible ways. For this particular production we were able to broker a donation to the local resident and business association in order to continue their valuable work in the community.

One of the associations commented “The voluntary donations brokered by Tower Hamlets Film Office in relation to the film service, provide a valued resource for the JHERA membership, by supporting efforts to fulfil the Aims and Objectives of the JHERA constitution including; protecting the interests of all residents, designing, promoting and hosting social activities, and ensuring the needs of our older and less advantaged residents are proportionally considered. Importantly, the donations help us maintain communication and cohesiveness among the friends and neighbours who live on the estate”

Check out the trailer below and look out for the film when it is out in cinemas on August 6th!

Save the Planet with the Co-op and the Tower Hamlets Film Office.

As part of their new campaign to encourage more of their customers to recycle, The Co-op filmed in 2 parks in the borough. The beautiful Ion Square Gardens in Shoreditch, and Pollard Square near Bethnal Green. Filming their main character walking through each of the parks, the campaign highlighted the necessity for keeping out streets and parks clean and free of plastic waste.

Its great to large companies implementing measures to cut down on plastic pollution, so check out the commercial below!

The Land of New Football in Tower Hamlets

Filming scenes for a new Nike Commercial, Stink contact the Tower Hamlets Film Office, managed by The Film Office looking for a controllable basketball court to film scenes late into their night for their new spot entitled “The Land of New Football”. The sunken basketball court located on the Robin Hood Gardens Estate offered the perfect location to suite the productions needs.

Based in Poplar, the estate offers fantastic views over Canary Wharf. It is characterised by broad aerial walkways in long concrete brutalist blocks. It consists of one long block, built from precast concrete slabs, surrounding a landscaped green area and a small hill made from construction spoil. For the dramatic opening of the spot, the production filmed their contributor standing proudly at a plinth celebrating the birth “…of a new land! The land of new football!”

The powerful ad highlights the need for inclusivity in football, where the game belongs to those who play it, and where everybody’s welcome. Check out the ad below.

On Robin Hood Gardens estate and now available for filming are a mixture of single-storey apartments and two-storey maisonettes, with wide balconies (the ‘streets’) on every third floor. With the block being partially decamped, we have a wide variety of empty flats and houses which are now also available for filming! So get in touch now to facilitate your shoot at this fantastic varied location!

It looks like it will be a hotbed of summer filming over the next few months, so check back soon to see what else has been going on in your borough!

You can call or send us a message and we'll get back to you, asap.

London Reels in the FilmingNews